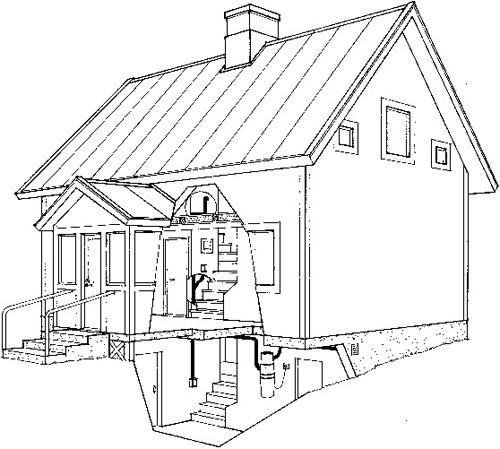 The panelled wall of the staircase was utilised in the placement of the piping system. On the first floor, two of the outermost panels were removed on the side of the stairs leading down to the cellar, and a space was sawn for the piping in the wall’s wooden frame. A hole was drilled into the wall on the first floor for a wall inlet. After the piping was installed, the wall panels were nailed back to cover the dust pipe. The cellar was built with cast concrete walls, which is why on this floor the dust pipes were installed as a surface installation. A hole was drilled into the outer wall for the vacuum cleaner’s exhaust pipe, and the exhaust vent was mounted into place from the outside to ensure a neat and functional whole. Upstairs, the end of the dust pipe reached the attic space between the outer wall and the habitable rooms, and from there the pipe was extended to the wall of the attic room. A hole was drilled for a wall inlet at a height of 90 cm. After installation, the pipe left in the cold space was thermally insulated with 50 mm thick wool insulation.

Also check out other examples:

Thank you for contacting us.